El Cid: God's Own Champion, by James Fitzhenry relates the heroic stories of  sanctity and success in battle against God's enemies in Catholic Spain!

I was thunderstruck to find that this contemporary writer wrote a fast action, high stakes, story about a Catholic hero with no innuendo, warped perspective, or false ideas of the Catholic Faith. Jim keeps you sitting on the edge of your seat, "What's coming next?!"

The Cid is a giant in the list of Catholic heroes and I think that every Catholic high school student would be inspired by his story.

Wonderful Book For Boys And Girls! 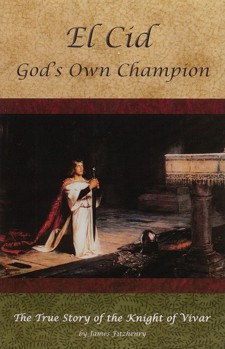 Do you know his story? Are you tired of the endless books that tell the story of little bad boy runs away from home, does something bad and becomes a saint?

The true story of the Knight of Vivar is an inspiring biography about an extraordinary Catholic knight in Spanish history, "chosen by God to save his nation from Islamic aggression."

This is a great book for giving as a gift or for using in Catholic high school curriculum.

Further, this Catholic hero is "Known by the honorary title of El Cid, Rodrigo Diaz is an epic hero who is relevant to our time." A Muslim historian, even, acclaimed him "a miracle among the great miracles of the almighty." "The Cid is an example of what can be achieved through devotion to duty, prayer and trust in God." (-Back cover.)

"The life of Rodrigo Diaz stands out in the history of Roman Catholic Church heroes as one of the most blessed and courageous knights in Catholic history. He is considered by many as one who is among both saints and soldiers."

My personal opinion is that El Cid: God's Own Champion is one of the best Catholic living history books available. Catholic schools, Catholic home school families, and adults will appreciate the detailed actions of the Cid, the beautiful descriptions of the country in which he rode, his pitiful plight in the face of injustice, and his strength in virtue.

I was grateful to see that there were no suggestive romantic scenes, disproportionate admiration for older times, or denigration of women. It truly is one of the best Catholic history books I have had the pleasure to read. --M. Fifer, St. Anne's Helper

You may buy The Cid: God's Own Champion and other new and used Catholic books at Amazon here.

Their Learning to Love God, is a children's book with 49 beautiful color illustrations to inspire your child to a greater love of God!

Learning to Love God fills a void in Traditional Catholic children’s literature. It is a unique and inspiring work to help parents and grandparents introduce the truths of the Faith – and the images of Catholicism – to their little ones. -Editor, Catholic Family News

"The purpose of this book, an entirely new creation, is to present God to young readers to make Him known and loved. This spiral bound book is child-friendly with large print, plenty of white space, color drawings that communicate the sense of the sacred, and is printed on heavy stock."

Order these books by emailing Catholic Vitality Publications at

catholicvitality@yahoo.com With the subject line:

El Cid was an exciting story and well written. I did not know about The Cid before I read it.

It was one of the best books that I've ever read and it had a good history of Spain. I didn't realize how hard it was to win the country back from the Moslems.